It’s hard to think that year after year we need to go back to the debate on the validity of affirmative actions that aim at the inclusion of socially underrepresented groups in workspaces.

The hot topic at the moment involves the professional social network, LinkedIn. The company, which has more than 740 million users and is present in practically all countries, once again excluded job posts exclusively for black and indigenous people in Brazil.

LinkedIn is a global business social platform that positions itself as allies of diversity. So why, even so, did the company take this position in the face of vacancies that supposedly went in favor of what it defends?

I invite you to reflect on inclusion in selective processes – not only in Brazil, but in the world as a whole.

And if you like to receive articles like this directly in your inbox, consider subscribing to our interactive newsletter below!

It all started when the Brazilian research institution Laut advertised on LinkedIn a job position where Black and Indigenous candidates were preferred.

For Brazil, the ad was harmless (in fact, it was even well regarded by many as a step to reverse inequality, especially in higher positions).

Then LinkedIn removed these job offers, explaining that the decision was based on the company’s current global policy, which understands that “people with the same talents should have access to the same opportunities” indicating that affirmative actions are understood as discriminatory actions and create a situation of inequality between talents.

This had large (and bad) repercussions in the country. Dozens of large companies protested, federal prosecutors opened inquiries and activists sued.

The multinational company Natura&Co (also owner of Avon and The Body Shop) signed a manifesto of repudiation of LinkedIn’s decision. Other giants like Oracle, Unilever, Bayer, AB Inbev, and Santander also expressed support for the rejection initiatives.

And it has gone even further: Federal Public Ministry notified Linkedin to provide explanations about the case.

After all the pressure, LinkedIn had reversed its approach and informed that it would change its policy for Latin America.

But, despite that, this episode puts us on alert about the need to reaffirm our position in relation to inclusion policies.

The word inequality has the power to cause different feelings in people, but never indifference. In the dictionary this word is explained as: character, state of affairs or people who are not equal to each other; dissimilarity, difference.

I would like to highlight here the passage that says “people who are not equal to each other” — and I couldn’t agree more and reinforce that all people are different. Human diversity allows us to see the world with a wealth of divergent thoughts and plural ways of being.

However, due to our differences or characteristics that make us up (race, sexual orientation, gender identity, disability, origin or generation), we are placed in a position of greater or lesser access to resources and opportunities.

As taught by Djamila Ribeiro, a Brazilian feminist thinker and writer, Social Locus allows us to see how social dynamics reproduce and feed inequalities. In other words, affirmative actions do not produce inequalities as the employment platform tried to point out, but on the contrary, such actions seek to combat the myth of meritocracy and reduce disparities already experienced in the labor market.

Brazil is a South-American country with a historical miscigenation due to the original indigenous population, European colonization, and slaves coming from Africa as little as two centuries ago. Althought the country was the last one on the continent to end slavery, society’s formation is similar to most of the American countries.

Affirmative action isn’t new in Brazil. Although the Racial/Social Quotas were only approved in 2012, actions aimed at reserving places in universities for low-income, black and indigenous students have been taking place since the 2000s.

It is also important to remember that, since 1991, Brazil has a law that provides a number of reserved job vacancies in companies for people with disabilities, in order to ensure the inclusion of this population in the job market.

Along these same lines, there is already a provision for quotas by gender in political parties and even reservation of seats for women in Legislative Houses at all federal levels. In both cases, 30%.

In the global context it is possible to find policies that are very similar to these. In India, for example, since the 1930s there have been racial quotas in all public services. In Malaysia, Australia and New Zealand there are also policies that seek to reduce inequality between social groups.

In the US, although there is no law that obliges Universities to reserve racial quotas, since the 1960s we have noticed movements within these spaces in the search for a diversity of candidates to open positions. The US Supreme Court allows Universities to use social aspects such as race and gender, for example, as one of the factors for accepting students.

Thereby, we verify that affirmative actions are used by different countries and in different contexts as a powerful tool in the reduction of social inequalities.

We’ve come a long way, but it’s still not enough

Returning to Brazil, we can see some results of affirmative actions. Between 2010-2019 we noticed an increase of 400% in the number of black students in Brazilian Universities. For the first time, the population that declares itself as black or mixed-race started to represent more than half of higher education students in the public universities, reaching a presence of 50.3%. However, this does not translate into more black people in companies’ workforce.

According to IDados Institute, based on data from the IBGE’s (Brazilian Institute of Geography and Statistics) National Survey for Household Sampling, in the first quarter of 2020, 35% of black people with higher education worked in positions that do not require a degree.

When we look at management positions, only 4.9% of black people occupy seats on the Boards of Directors of the top 500 companies in Brazil, based on revenues.

In the USA, Black workers and American Indian and Alaska Native workers remained twice as likely to be unemployed as their white counterparts.

And what does this reveal to us?

1. There is currently an institutional structure that privileges some people, mostly: white, cisgender and heterosexual.

2. Even though there are affirmative actions in different spheres of power (public or private), we still realize that there are barriers for black people, for the most part, not to be able to access the labor market or grow in their careers.

3. We need much more intentionality, and especially coordinated actions between governments, companies and society.

The light cannot be at the end of the tunnel, it needs to be present in all of us.

Since January this year, Rock Content has also been structuring actions and policies that create exclusive and priority job positions not only for people with disabilities, but also for transgender people. And the first results can already be observed with hirings that meet both the diversity aspects, as well as the business need.

Diverse and qualified candidates are available in the market. What companies need to do —  with the support of networks like LinkedIn, if possible — is to offer opportunities and eliminate biases. Affirmative job postings are a powerful tool for social transformation.

In addition to hiring, companies and governments need to work to change the structure that produces and reproduces inequalities. It is necessary to revisit processes, change mindsets and convert our fine words into actions that will truly include all people. 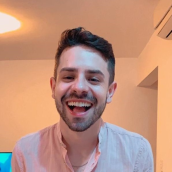 Top-level domain: what it is and how to choose one

What is front-end and back-end, and what are the differences between them?